The History by default 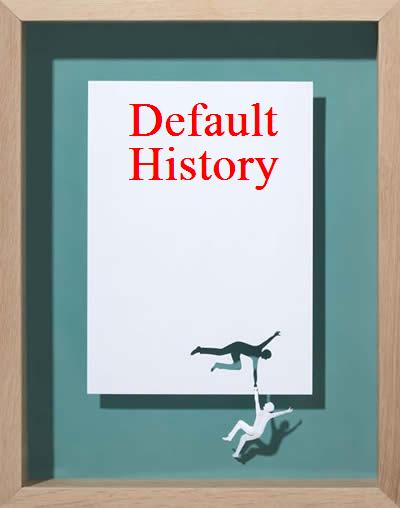 Greece is at the center of the sovereign debt crisis that is worrying many investors and increasing the volatility of stock markets across the world. This is not a new phenomenon for that country, which has defaulted on its external debt many times since achieving independence at the beginning of the 19th century. Here are some facts that all investors should know about the history of Greek sovereign debt defaults.

Ancient DefaultThe first recorded default in Greek history occurred in the fourth century B.C., when 13 Greek city states borrowed funds from the Temple of Delos. Most of the borrowers never made good on the loans and the temple took an 80% loss on its principal.
Five TimesGreece has defaulted on its external sovereign debt obligations at least five previous times in the modern era (1826, 1843, 1860, 1894 and 1932). The first episode occurred in the early days of that country's war of independence, and the last default was during the Great Depression in the early 1930s. The combined length of period under which Greece was in default during the modern era totaled 90 years, or approximately 50% of the total period that the country has been independent. (For related reading, see Recession and Depression: They Aren't So Bad.)
Although many might consider this level of default to be excessive, Greece is nowhere even close to the top of the list. Venezuela and Ecuador, with 10 defaults each, share the (dis)honor of being the greatest serial defaulters of the modern era.
Greek War of IndependenceThe Greek War of Independence began in 1821 and targeted the end of Ottoman authority, which had ruled most of that region for centuries. In 1824, a loan of 472,000 pounds was secured on the London Stock Exchange to continue this fight. This offering was oversubscribed and buyers were required to put down only 10% of the purchase price with a promise to pay the balance over time. An additional loan of 1.1 million pounds was floated in 1825.
The unfortunate fact about these two loans was that speculators and middlemen in London skimmed off much of the proceeds before Greece received any funds. Another issue was that the Greek War of Independence soon descended into civil war between rival factions, making it difficult to even figure out who should receive these funds.
No interest payments were ever made to the bondholders on these two loans, and the value of the paper eventually plummeted to a fraction of the par value. It wasn't until 1878 that the Greek government settled on the loans, which by then with accrued interest had increased to over 10 million pounds.
Loan of 1832In 1832, another loan totaling 60 million drachmas was given to Greece, which was officially an independent sovereign nation. The loan was arranged by the French, Russian and British governments, and was ostensibly given to help Greece build its economy and manage the initial stages of governance.
The funds were mostly squandered on the maintenance of a military and the upkeep of Otto, a Bavarian prince that was made King of Greece by the English. Greece managed to stay current on this loan until 1843, at which time the government stopped payments.
The InterregnumAfter this default, Greece was shut out of international capital markets for decades. During this interregnum, the government became dependent on the National Bank of Greece for borrowing. The government's needs were modest at first but soon escalated and the National Bank of Greece provided funds at interest rates that were twice the international lending rate. (For related reading, see Get To Know The Major Central Banks.)
1893 DefaultAfter the Greek government settled outstanding defaults in 1878, the global capital markets opened once again to Greece and, as you might expect, lenders were only too eager to provide funds. This borrowing increased to unsustainable levels and the government suspended payments on external debt in 1893.
In 1898, foreign pressure led Greece to accept the creation of the International Committee for Greek Debt Management. This committee monitored the country's economic policy as well as the tax collection and management systems of Greece.
1932 DefaultIn the early 1930s, many countries defaulted on sovereign debt obligations as the world economy contracted and entered what became known as the Great Depression. Greece imposed a moratorium on paying on its outstanding foreign debt in 1932. This default lasted until 1964, the longest of any of the country's five defaults. One interesting historical anecdote is that Eleftherios Venizelos was the Greek Prime Minster that defaulted on Greece's sovereign debt in 1932.
Evangelos Venizelos, the current Greek Deputy Prime Minister and Minister of Finance, is at the center of current crisis and heavily involved with negotiations with the European Union. The two are not related, however, and there is even unsubstantiated speculation that he changed his name to Venizelos to gain political advantage. (For related reading, see The Italian Crisis.)
The Bottom Line
The history of the Greek financial system is not encouraging to those investors that are hoping that this country avoids defaulting on its sovereign debt obligations. Some may take comfort in knowing that while previous defaults were dislocating to the market, the global financial system did not suffer any long term damage because of these events.