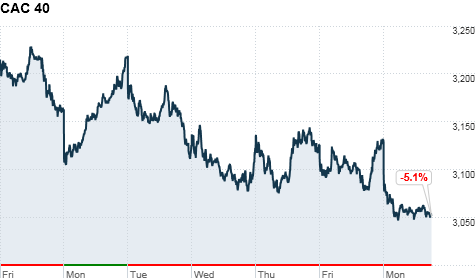 European stocks sold off sharply Monday, following yet another failure by Greek politicians to form a coalition government and a disappointing vote in Germany's largest state
"We view many Spanish banks as vulnerable to the current recession and ongoing real estate crisis," wrote Moody's analysts in a weekly credit outlook Monday. "We expect problem loans an loan losses to growth further."

Turmoil in Greece, and its tendency to get worse not better, is one of the most troubling aspects of the European economy. The lack of any obvious solution for the nation's beleaguered economy, and the specter of a possible exit from the eurozone, has caused Greece to spread its discord through the rest of the continent.

"Political uncertainly stemming from the outcome of the Greek elections has unsettled the markets," wrote Laurence Boone, in a report that he coauthored with other analysts from Bank of America Merrill Lynch. "The next weeks are crucial for Greece, as political paralysis could threaten the new program, potentially triggering tail risk scenarios that could eventually result in an exit from the euro area."

Indian investors should only watch for the outcome next week, because our market is die hard follower of global market
Posted by Dhirendra at 8:15:00 PM