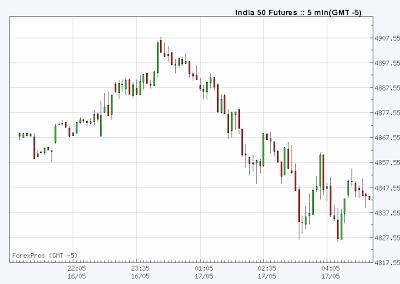 "With -ve Global cues, Failure to take out the highs would maintain the lackluster mode." The A/D ratio turned negative, to 1:3.The action formed a small Bear candle. After 10 consecutive lower lows, Nifty tried to trade above 4920 but it was futile, which remains a crucial area for bulls to move higher.
Today Nifty has made a double bottom in last two hour which suggest Bulls reluctant to move lower. US future is down and taking rest on minor support at 12500.
tomorrow if Nifty opened below 4827, one may take short position at around 4800 to 4827 for target of 4770 then 4750

Keep an eye do not try to trade in opposite direction if found Nifty at 4750 in early hour of the trade.
Posted by Dhirendra at 10:29:00 PM