How long can the stock market go without a major rally? Simple question, right? The simple answer is that there is no limit – a month, 6 months, a year without a rally – anything is possible because there is no written rule that says, for example, “The Dow can only go x-number of months without a 1000 point rally”,

But, as it turns out, there is a limit. If a Bull market is to retain its bullish qualities, it must rally often enough to keep option traders happy. It is never possible to please all option traders, since there are virtually endless option-trading techniques. Additionally, each winning technique corresponds with a losing one for another trader in what is known as a zero-sum game. Still, there are some types of option trades that are quite common, and those traders are kept happy when the stock market rallies at least once every 16 weeks or so.

Specifically, Long Call* traders and Married Put* traders (*see trade specifications in chart description below) remain profitable as long as stocks experience at least one major rally every 16 weeks, or about once every 4 months. When this occurs, the broad basket of stocks that make up the S&P 500 are said to be in Bull Market Stage 2, which is where the market is at this very moment. 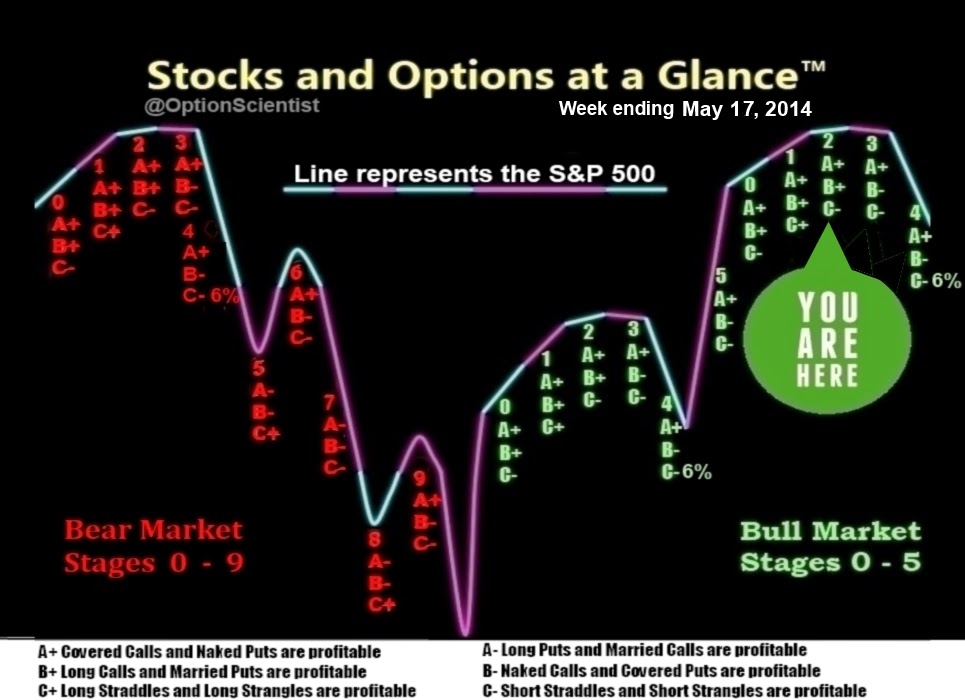 *All strategies involve at-the-money options opened 4 months (112 days) prior to this week’s expiration using an ETF that closely tracks the performance of the S&P 500, such as the SPDR S&P 500 ETF Trust (NYSEARCA:SPY)
You are here – Bull Market Stage 3.
On the chart above there are 3 categories of option trades: A, B and C. For this past week, ending May 3, 2014, this is how the trades performed:
Using the chart above, we can see that the combination, A+ B+ C-, occurs whenever the stock market environment is currently at Bull Market Stage 2. For a description of Stage 2, as well as a comparison to all of the other stages, follow the link below:


Bull Market Stage 2 tends to be a very optimistic environment for rising stock prices. However, it’s been quite a while since there was a major rally on Wall Street; the last one being the nearly 100 point increase in the S&P this past February. The 16-week threshold is quickly approaching, and unless a significant rally occurs by early June, Long Call/Married Put traders will not be happy; and usually when they’re not happy, the market simply does not seem bullish.
Those who buy Call options (commonly known as Long Call traders) as well as stock owners who buy Put options as protection for their stock (known as Married Put traders) are generally happy as long as there is a significant rally every 16 weeks, or about once every4 months. As mentioned above, all option trades, including Long Calls and Married Puts, can have tremendous variety, namely due to numerous choices of expiration dates and strike prices. Such a blanket statement – that a major rally every 16 weeks keeps these traders happy – while specifically referencing near-the-money strike prices and 4-month-out expirations, covers a large percentage of such option trades, including many with different strikes and expirations.
Long Call traders, as well as Married Put traders, require stocks to rally in order to earn a profit. That is because these traders must pay a premium to open the option trade. If the stock price fails to rise significantly, the profit on the stock could be insufficient to cover the expense of the option premium.
Profitability from Long Call/Married Put trading, which occurs during Bull Market Stage 2, has historically been associated with bullish tendencies in the S&P 500. These include: 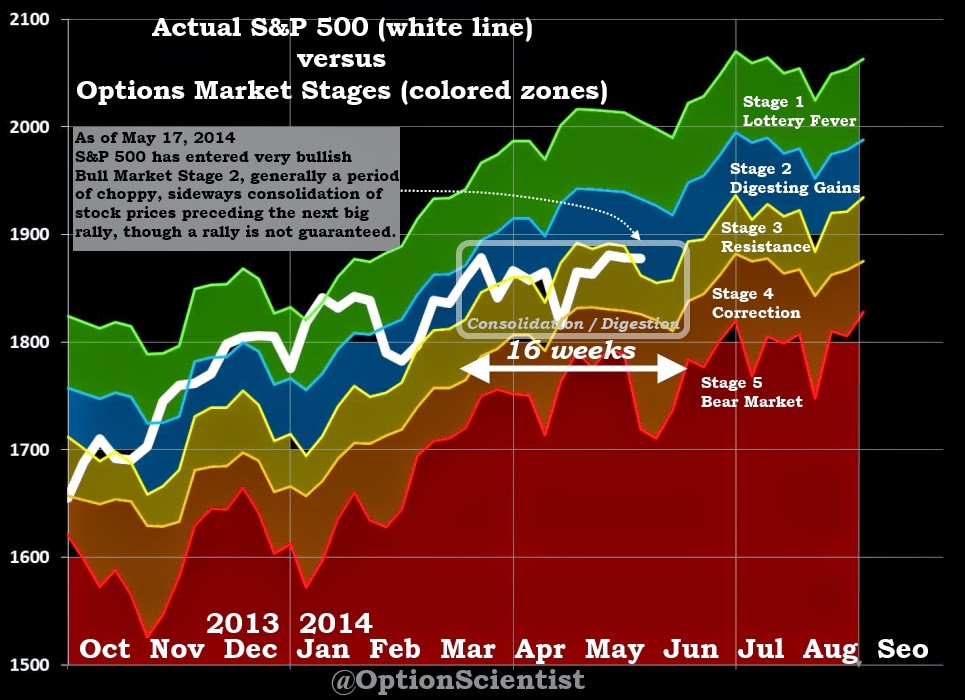 As can be seen on the chart above, failure of the S&P to rally in the next few weeks would result in the market entering Stage 3, characterized by the failure of Long Call and Married Put trades to return profits. Stage 3, while bullish, has some less-than-bullish tendencies, such as:
Stage 3, should it occur, and it will occur if the S&P does not rally, will likely result in the continuation of the recent inability of the S&P to set and maintain new highs. In other words, failure to rally soon will inhibit the ability to rally in the future; and that’s why it is so important for the stock market to rally at least once every 16 weeks.
Weekly 3-Step Options Analysis:
On the chart of “Stocks and Options at a Glance”, option strategies are broken down into 3 basic categories: A, B and C. Following is a detailed 3-step analysis of the performance of each of those categories.
STEP 1: Are the Bulls in Control of the Market?
The performance of Covered Calls and Naked Puts (Category A+ trades) reveals whether the Bulls are in control. The Covered Call/Naked Put Index (#CCNPI) measures the performance of these trades on the S&P 500 when opened at-the-money over several time frames. Most important is the profitability of these trades opened 112 days prior to expiration. 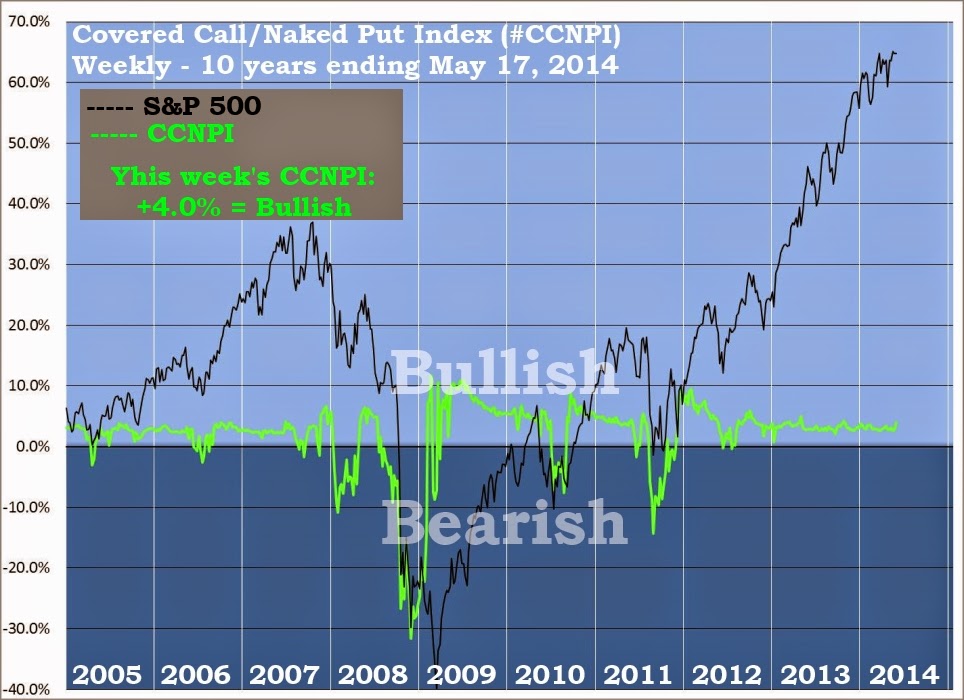 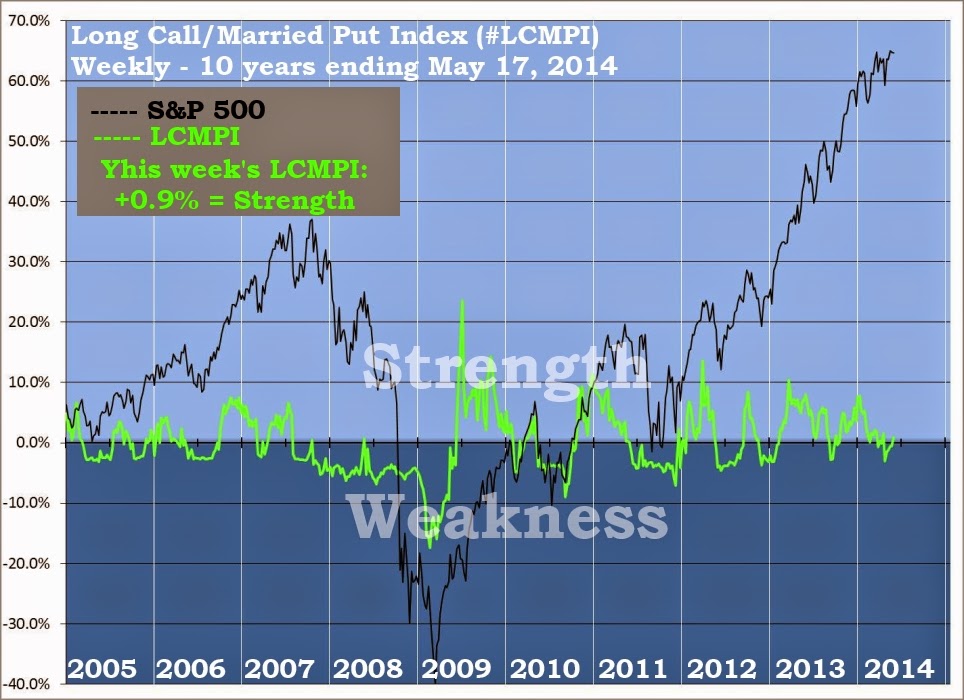 Long Call trading became unprofitable this past March, Those losses intensified during April and early May before reverting back to profits this past week. Losses for Long Calls are a sign of weakness for a Bull market. Such weakness can be dangerous because it lowers the perceived reward potential for stock owners, which makes stocks less attractive, in turn lowering the price stock sellers are able to obtain from buyers.
Failure of the S&P to close next week above 1855 would be a sign of renewed weakness; and weakness always has the potential of putting downward pressure on stock prices. If the S&P fails to close the upcoming week above 1855, Long Calls (and Married Puts) will fail to profit, suggesting the Bulls have lost confidence and strength. The reasoning goes as follows:
•           “If I can pay the premium on an at-the-money Long Call or a Married Put and still manage to earn a profit, then prices have been going up – and going up quickly.” The Bulls are not just in control, they are also showing their strength.
•           “If I pay the premium on a Long Call or a Married Put and fail to earn a profit, then prices have either gone down, or have not risen significantly.” Either way, if the Bulls are in control they are not showing their strength.
STEP 3: Have the Bulls or Bears Overstepped their Authority?
The performance of Long Straddles and Strangles (Category C+ trades) reveals whether traders feel the market is normal, has come too far and needs to correct, or has not moved far enough and needs to break out of its current range. The Long Straddle/Strangle Index (#LSSI) measures the performance of these trades on the S&P 500 when opened at-the-money over several time frames. Most important is the profitability of these trades opened 112 days prior to expiration. 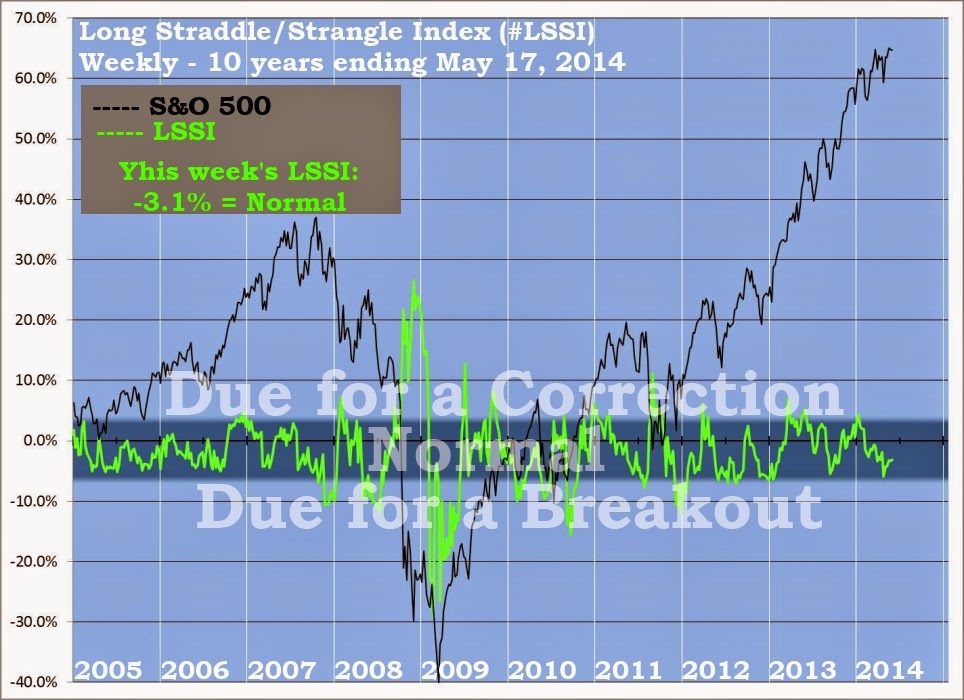 The LSSI currently stands at -3.1%, which is low but not quite at the level of -6% considered excessive. Low levels, especially those below -6%, have historically been followed by major breakouts in which the S&P moves out of the trading range of the past several months. Breakouts can either occur as the S&P soars to new highs or else makes lower lows than it has experienced for quite some time.
Negative values for the LSSI represent losses for Long Straddle option trades. Losses, when excessive, represent one of three unusual conditions for Long Straddle trading, each with a distinct prognosis for the stock market.
The 3 unusual conditions for a Long Straddle or Long Strangle trade are:
The reasoning goes as follows:
•           “If I can pay the premium, not just on an at-the-money Call, but also on an at-the-money Put and still manage to earn a profit, then prices have not just been moving quickly, but at a rate that is surprisingly fast.” Profits warrant concern that a Bull market may be becoming over-bought or a Bear market may be becoming over-sold, but generally profits of less than 4% do not indicate an immediate threat of a correction.
•           “If I can pay both premiums and earn a profit of more than 4%, then the pace of the trend has been ridiculous and unsustainable.” No matter how much strength the Bulls or Bears have, they have pushed the market too far, too fast, and it needs to correct, at least temporarily.
•           “If I pay both premiums and suffer a loss of more than 6%, then the market has become remarkably trendless and range bound.” The stalemate between the Bulls and Bears has gone on far too long, and the market needs to break out of its current price range, either to a higher range or a lower one.
*Option position returns are extrapolated from historical data deemed reliable, but which cannot be guaranteed accurate. Not all strike prices and expiration dates may be available for trading, so actual returns may differ slightly from those calculated above.
The preceding is a post by Christopher Ebert, co-author of the popular option trading book “Show Me Your Options!” He uses his engineering background to mix and match options as a means of preserving portfolio wealth while outpacing inflation. Questions about constructing a specific option trade, or option trading in general, may be entered in the comment section below, or emailed to OptionScientist@zentrader.ca
Posted by Dhirendra at 6:23:00 AM