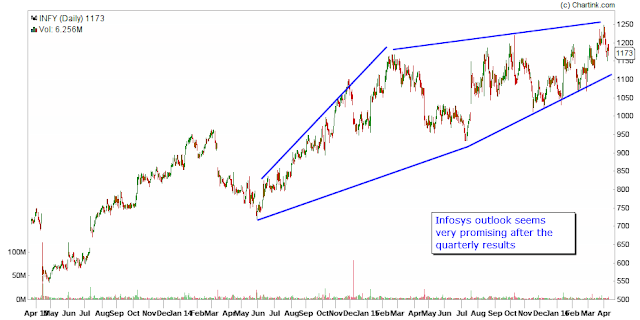 1. FY17 revenue guidance: The biggest positive surprise of the day was Infosys's bold guidance of 11.8-13.8% for the 2016-17 financial year, given their past track record of providing conservative growth forecasts and largely sticking to the mantra of "under-promising and over-delivering" that was put in place by founder NR Narayana Murthy. In recent investor conferences, CEO Vishal Sikka has promised that Infosys will return to industry-leading growth rates in FY17 and its latest forecast reaffirms the recent management commentary.

3. Attrition rates: Another positive that came out of Friday's results was the reduction in attrition rates -- indicating that the employee morale-boosting measures undertaken under Sikka are largely falling into place and employees are now rallying around the management.

4. BFSI underperformance: The big concern for Infosys would be the underperformance of its largest business vertical, financial services and insurance. On Friday COO Pravin Rao conceded that the insurance vertical has underperformed in recent months and that is an area of concern. Infosys currently gets well over 40% of its overall revenues from the BFSI sector.

5. Deal pipeline: The pipeline for large deals remains strong and at the moment it looks like Infosys will continue with its momentum on large deals for the next few quarters.

6. Top executive promotions: Company veterans Mohit Joshi, Sandeep Dadlani and Ravi Kumar S were all rewarded with promotions after a year that saw a largely improved performance from most of its key verticals. Infosys is clearly pulling out all stops to retain key leaders and disproportionately rewarding top performers.
7. Geographies: While growth was lacklustre in North America, its biggest vertical, the company saw strong growth across most other geographies, especially in India where it won large deals from the likes of the GST network.

8. Margins: Margins were largely stable at 25.4% and the management expects that to continue in the near term with margin levels expected at 24-25% in FY17.

10. Newer services: Infosys said it was progressing strongly with some of its newer initiatives around futuristic tech platforms such as the Infosys Automation Platform where it now has more than 125 clients. The company, however, has still not found a replacement for Michael Reh, who used to head the company's EdgeVerve business.