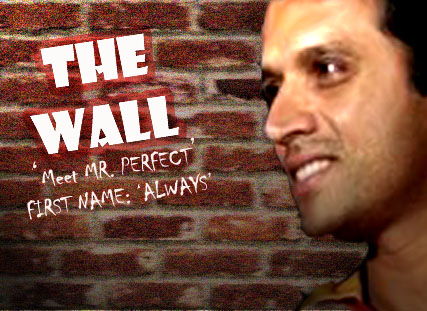 Rahul Dravid, Indian Team Support for long, decided to move on, to fulfill other commitment of his life. No word can describe his true contribution to world cricket. He is true ambassador of the sport called Cricket.
Crick info describe him as
"Rahul Dravid is probably one of the last classical Test match batsmen."


A look at some lesser known facts about the prodigy we call 'The Wall.'
* Glenn McGrath once said that if there was one Indian player who could get a direct entry into the famous Australian team of the late 90s, it would be Rahul Dravid.
* Dravid is the only player in the history of cricket who made his debut and retired in the same match. He played his only T20, against England last year and scored 31 off 21.
* Was voted the sexiest sports personality in India in an online survey (2004-05). He beat the likes of Yuvraj Singh and Sania Mirza.
* It is well known that Dravid was nicknamed Jammy because his father worked in a company which manufactured jams. Not many though, know that there is also a local school tournament named after the veteran batsman. The 'Jammy Cup' is held in Bangalore and the man-of-the-match gets the title of 'Jammy of the Day.'
* Dravid played hockey before he took to cricket. With a natural flair for the sport, he was even chosen to represent Karnataka's junior state team.
* Was proposed by a woman as part of MTV's popular show - Bakra. He was seen advising the 20-year-old (wannabe) Mrs Dravid about education and concentrating on other things in life apart from her obsession for him!
Source: NDTV
Posted by Dhirendra at 1:51:00 PM