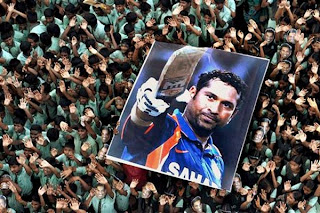 Congratulating Sachin Tendulkar for scoring his 100th century in international cricket today, BCCI secretary Sanjay Jagdale said it was a matter of pride for every Indian.

"It is a matter of pride for all. It is a great achievement. Unparalleled in the history of cricket," Jagdale told PTI over phone.


When asked whether Tendulkar should follow Rahul Dravid, who recently announced retirement from the international cricket, Jagdale said, "It is up to him (Sachin) to take a call on the issue. He is mature enough to take the decision.

"We are nobody to suggest him to take a call....Though Dravid has called it a day, both Tendulkar and Dravid still have lot of cricket in them."

Tendulkar got his 100th international ton in Dhaka today, against Bangladesh.

Tendulkar, en-route to his much awaited milestone, also scored his first ODI ton against Bangladesh during India’s Asia Cup tie at Dhaka on Friday.

Tendulkar scored 114 off 147 balls which included 12 boundaries and six.

The master blaster, who already has a pile of runs and records to his credit, achieved the incredible milestone when he turned spinner Shakib-ul Hasan towards fine-leg.

The star batsman first looked heavenwards and then acknowledged the cheers of his teammates and the crowd by lifting his bat. (PTI)

Here is the list of Sachin Tendulkar’s hundred tons in international cricket: