No Recession then When? 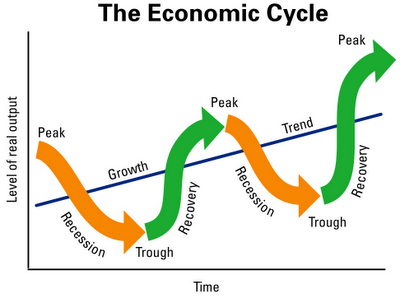 There have been a few calls as of late (Hussman, ECRI, Shilling) stating that we are currently in the next recession. Then there is everyone else. While the "optimistic" outlook is always more enjoyable to listen to - the problem is that the current "no recession" view is primarily predicated on current quarter growth rates looked at in isolation. These data points are then extrapolated into continuous future economic expansion. For example, in the 2013 CBO Budget (Excel file) the average economic growth rate used is 5.28% which is substantially higher than the 2% growth rate currently projected by the Federal Reserve. More importantly, neither the Fed, or the CBO, have forecasted a recession in future years. All assumptions are based on the expectations that somehow recessions have been repealed. This is hardly the case.

However, the no-recession camp is currently correct. The domestic economy is not currently in a "technical recession," as measured by Gross Domestic Product, as the economy is growing at a 1.5% annualized rate in the second quarter. However, there is a mistake being made by many of the no-recession calls. Most of the assumptions are based on looking at the individual current data points of consumption, incomes, employment and production. The assumption is that since the data is not currently negative then a recession is not imminent. However, as investors, we should not be concerned with what is happening "imminently" but rather what the macro environment will look like six months from now. As we have often stated, it is not the individual data points that are important - but the trends of the data that tell the real story. Economic change happens at the margins. It is an indisputable fact that a recession is coming. For economists, and analysts, the "R" word is as feared and loathed as the plague. A mere mention of the word will send them running in panic, pointing fingers and screaming heresy. The reality, however, is that recessions are part of the normal business cycle where the economy removes the excesses that were built up during the previous expansion.

As I stated, the recent prints of economic data are certainly not in recessionary territory. However, that small fact should not lead one to rest on their laurels when analyzing the data, and ultimately, making decisions about their investment portfolio. Take a look at the first table.
What the table shows you the quarterly rate of change of a composite indicator represented by the major drivers of the economy - real personal consumption expenditures, industrial production, real personal incomes and employment. The last column is the annualized growth rate of inflation adjusted GDP. While the numbers are all positive - they don't really tell you much when they are taken out of context.
Once we add context - the table will make much more sense. Each of these numbers is where the composite index and real GDP stood just two quarters prior to the onset of a recession. With the economy currently growing at 1.5% annually it is difficult for the mainstream media and analysts to comprehend that a recession could be just a few months away. However, in second quarter of 2007, with the economy growing at 2.92%, it was unfathomable that the economy would be in recession just two quarters later. However, a study of the trends of the underlying data clearly showed an economy slowing.
The chart shows the quarterly change in the composite indicator versus quarterly real GDP. What is consistently overlooked by the media, analysts and economists is that the changes occurring at the margin are subtle in the beginning with a stagnation in the rate of growth. However, this stagnation has always been a "siren's song" to economists and analysts who interpret the data as "a soft patch", "a mild slowdown", "a goldilocks economy", "a pause before reaccelerating", etc. You have heard them all before. 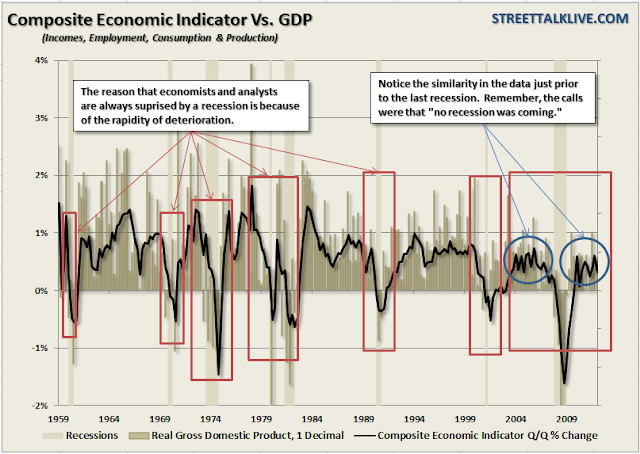 The reality is that there is very little warning of the change between a "soft patch" and the slide into a full-blown recession. It happens very quickly over a couple of quarters and is always "unexpected" by the mainstream analysts. If you look at the chart closely you will notice that it is highly common for the underlying economic indicators to advance, and sometimes even sharply, just before plunging into a recession. I have circled, in blue, the stagnation of the composite indicators prior to the last recession. Remember then, like today, we were being told of a "goldilocks economy", "subprime was contained" and "a soft landing." How well did that work out for you last time?
Currently, the economic indicator composite is NOT at recessionary levels. The chart shows the composite indicator set up as a recession indicator. When the indicator slides below a reading of .25% it has historically coincided with the onset of a recession. While the chart does not show you, however, is that the indicator is currently at a reading of .31 which is down 50% from last quarters reading of .60 - still not recessionary but the trend is clearly negative. Furthermore, it is a trend worth paying close attention to.
This brings me to the most important point for investors. 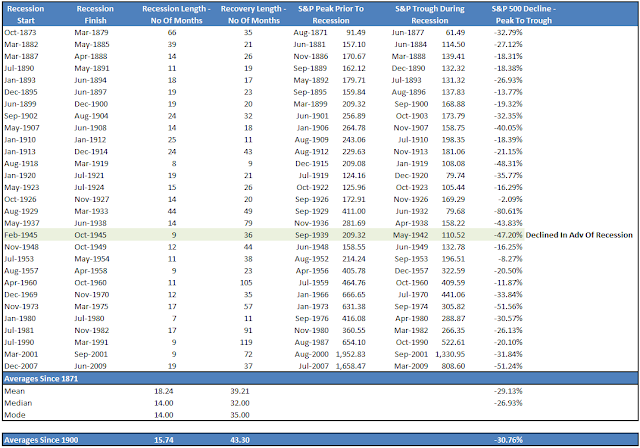 "R" = Lower Stock Prices
Excesses occur not only in the economy but in the markets as well. As economic growth advances - companies' earnings grow as a function of the economic growth. This growth is then extrapolated by investors who bid up stock prices to reflect improved valuations and earnings. It is all completely logical. However, stock prices, driven by emotion and psychology, can reach valuation extremes at both ends of the spectrum. This explains why there is a high correlation between economic growth, earnings growth and stock prices over a long period of time. While earnings can certainly outgrow the economy over short periods of time, particularly during the trough to peak cycle, they cannot outgrow the economy over long periods simply because earnings are a reflection of the economy and not vice versa. Prices, likewise, are correlated but are much more volatile due to the psychological components of "greed" and "fear."
The chart shows the long term comparison between the S&P 500 and earnings. Since 1957 the earnings' growth rate of the S&P 500 has averaged 6.94% annually versus 6.64% for GDP. However, the volatility of earnings was substantially higher with stock prices more volatile still. The expansion, and reversion process, have historically been dramatic in the past with no indication that such an event has been prevented in the future.
What is important for investors is an understanding that, despite claims to the contrary, a recession will occur in the future. It is simply a function of time. These recessionary drags inflict lasting damage to investment portfolios over time. The table shows the start and finish dates, prior peak, and peak to trough price declines during previous recessionary periods. The average draw down for all recessionary periods was 30.76% with an average recovery period of 43 months. For someone close to, or in retirement, this can be devastating.

After two recessions so far in this century, which coincided with very sharp market declines, investor's portfolios have yet to recover on an inflation adjusted basis. Furthermore, and most importantly, with a large segment of the investing population heading into retirement in coming years, the demand for income, over capital appreciation, will weigh more heavily on future market growth. Many individuals are now realizing their own mortality and the critical importance of "time" as an investment variable. We don't live forever.
While the economy is currently not in a recession the negative trends in the data certainly require monitoring. With very low lead times between non-recession, and recessionary, states it is very easy to get swept up in the mean reversion process as forward expectations are realigned with current earnings and economic growth trends. With a market that is driven more than ever by momentum, low volume and high-frequency trading - this reversion processes will continue to swift, and brutal, leaving invstors little time to react to market changes. This time is NOT "different" - a recession will reassert itself at some point. What is important is whether or not you are prepared to deal with it.