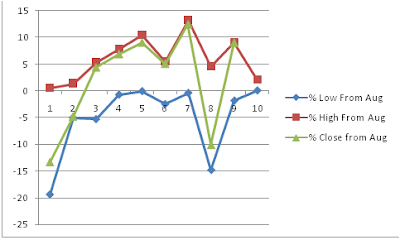 Most of us would have heard of Black September. No I am not talking about the infamous Munich massacre but the theory that the markets would tank in September. I did some number crunching from the years 2001-2009 to check out the facts and fiction.

1. In all the years from 2001 onwards, the low of September has been at least 0.5 % less than August close. This is irrespective of it being a bull or bear run. August close for this year is 5402. So, going by history we should see at least 5370 once this September.

2. The highs hit in September vary from 0.5% in a bear market to 10-12 % in roaring bull runs. This year the high recorded is already 2 pc higher than August Close. Since we are in somewhat neutral zone, neither roaring Bull run nor Bear run, if we take the Mean we get a rise of around 4-5 %. This would take the Nifty to 5600-5650 range as the high point.

The conclusions we can draw from the above data is expect a minimum low of 5370, high of 5600-5650 and a close of 5500. This will stand invalidated if there is another Black Swan event like terrorist attack, bank shutting down, European crisis etc.

Overlaying this analysis with where critical support and resistance levels are, at around 5370 trim down your shorts if you have any and wait for convincing breach of 5350.
Above 5550, go long with a stop loss of 5510. The month is ahead of us, lets see how it plays out.
Black September group was responsible for the Munich Games massacre of Israeli athletes in 1972. More details from wiki at below link: